Gigi, Sebi, Enrico and Robi formed the Piscia Korsakov in Udine, have some gigs in Friuli and Slovenia and, in 1997, record an LP called “Vivere la Merda”. Shortly after, the band breaks up, due to some components alcohol issues. Meanwhile, Gigi and Sebi were also involved and playing with another band, the Kriesti Rvota, a slightly more politicized punk band which will follow by breaking up in a while. 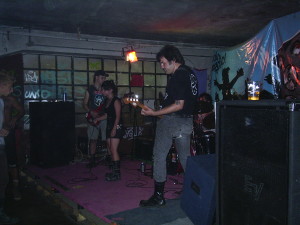 Almost ten years later, Gigi (drums) and Sebi (bass), after countless events decided to start back where they left off and, joined by Nichole (voice) and Ciro (guitar) from Trieste, formed VIVERE MERDA. After the first gig, Ciro leaves the band in order to focus on Metal music and is replaced from Samuel/UomoDonna. After some gigs, the first demo is recorded: a five tracks (some of them were old songs from the previously formed bands) CDR plus a live track. 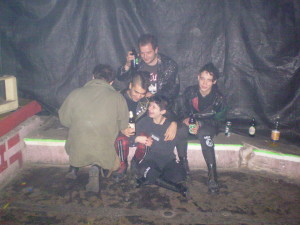 In November 2006 Sebi, very busy in getting drunk, left his place to Jubbi (from Cimex, Wonderpack and Abiotica, former bands from Treviso). A new CDR called “Pace Violenta” is recorded; it has seven new songs. By end of 2008, mr. UomoDonna finds an apartment in Germany for a while and Nicky, a Filipino punk, replaces him. 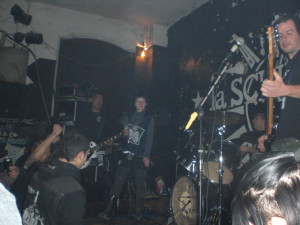 To end, also the singer disappears for unknown reasons (love, maybe?). There are no live shows for a while.

At the beginning of 2009, Dalila (from Foiba Punx) is hired for the four-date English tour with Disorder. After some researches, a new singer is welcomed: Alessia. In 2010 a split 12” with ANXTV from La Spezia is released. Vivere Merda’s,“Escort Punk”, has 6 tracks, while the side by ANXTV -”Diritto d’Illusione”- has 5 tracks.